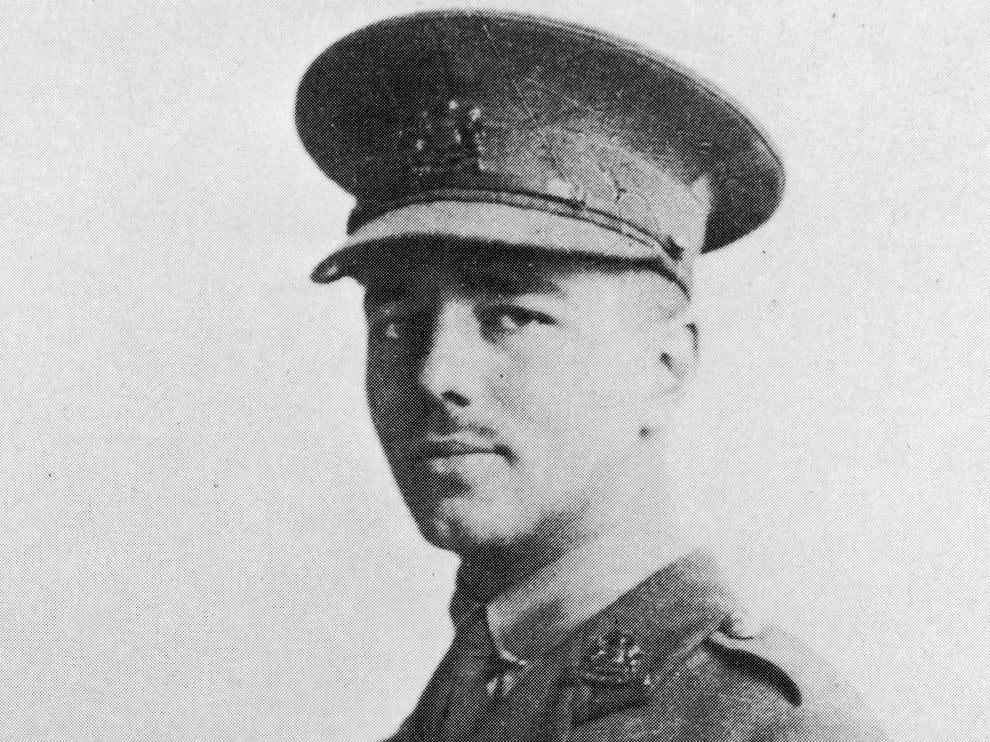 Bent double, like old beggars under sacks,
Knock-kneed, coughing like hags, we cursed through sludge,
Till on the haunting flares we turned our backs
And towards our distant rest began to trudge.
Men marched asleep. Many had lost their boots
But limped on, blood-shod. All went lame, all blind;
Drunk with fatigue; deaf even to the hoots
Of tired, outstripped Five-Nines that dropped behind.

Gas! Gas! Quick, boys! - An ecstasy of fumbling,
Fitting the clumsy helmets just in time;
But someone still was yelling out and stumbling
And flound'ring like a man in fire or lime ...
Dim, through the misty panes and thick green light,
As under a green sea, I saw him drowning.

In all my dreams, before my helpless sight,
He plunges at me, guttering, choking, drowning.

If in some smothering dreams you too could pace
Behind the wagon that we flung him in,
And watch the white eyes writhing in his face,
His hanging face, like a devil's sick of sin;

If you could hear, at every jolt, the blood
Come gargling from the froth-corrupted lungs,
Obscene as cancer, bitter as the cud
Of vile, incurable sores on innocent tongues, -
My friend, you would not tell with such high zest
To children ardent for some desperate glory,
The old Lie: Dulce et decorum est
Pro patria mori.

Wilfred Owen is a famous poet whose poetry, sent as letters to his mother from the front line, is an invaluable primary source of WWI history. Poems also helped lead the way in changing the way in which people back home viewed The Great War (WW1).

'Dulce et Decorum Est' - are the first words of a Latin saying by the Roman poet Horace that were often quoted at the start of the First World War. In translation, they mean 'It is sweet and right.' The full Latin saying ends the poem: 'Dulce et decorum est pro patria mori' - translated they mean 'it is sweet and right to die for your country'. There is a lot of ambitious vocabulary and imagery to explore in this poem. The glossary will help you better understand the poem:

Distant rest - a camp away from the front line where exhausted soldiers might rest for a few days, or longer

Hoots - the noise made by the shells rushing through the air

Outstripped - outpaced, the soldiers have struggled beyond the reach of these shells which are now falling behind them as they struggle away from the scene of battle

Lime - a white chalky substance which can burn live tissue

Panes - the glass in the eyepieces of the gas masks

High zest - idealistic enthusiasm, keenly believing in the rightness of the idea

Do you think this poem is in favour of war (pro) or against war (anti)?

What evidence can you find to support your viewpoint?

Look up any unfamiliar vocabulary used by Owen in his poem

Can you find examples of onomatopoeia?

Can you find any examples of similes?

Can you challenge yourself to find the metaphor?

Comma song from Grammaropolis - "Cut the Drama and Use a Comma"